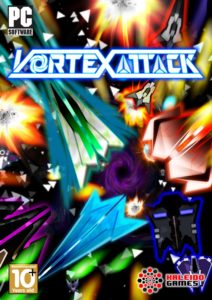 The alien war machines caught us by surprise. A strange energy vortex appeared near colony Vehar-12, then they came, swarming from the centre of the vortex.

But now we have hope. Our technicians patched together a captured war machine, and discovered the key to the vortices, a new kind of energy they’ve dubbed ‘Lumergy’.

The goal of each level is to close the vortices. Although some vortices will take several stages to close. Upon reaching a level where the vortex can be totally closed, it will unleash the most dangerous of its swarms to make things a lot harder for our players. The twist we’ve added in this game is that the vortex on each level will keep growing, throwing ever increasing waves of enemies to overwhelm the player, so that they must continually fight to push the vortex back. The game has been especially designed to play with up to 3 friends, although we’re considering adding an optional fourth player based on player feedback.

After their first game Beekyr, Kaleidogames wanted to experiment with a more abstract space theme, whilst building on the successful gameplay of Beekyr. This resulted in the initial prototype for Vortex Attack, which they put in front of players at several game festivals. Even in this rough state, players were immediately captured by the game, with people playing all day long at each festival. Following that success, Kaleidogames decided to make it into a full game, including a local multiplayer mode that combines the best elements of competition and collaboration.